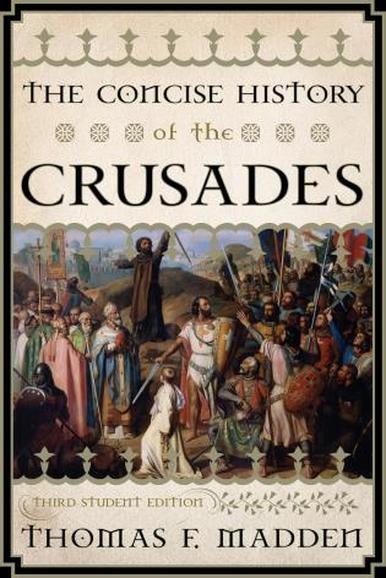 The Concise History of the Crusades Third Edition (Lanham: Rowman and Littlefield, 2013).

"In little more than 200 pages, in crystal-clear and economical prose, Madden does a superb job of exposition. As an introduction to the vast literature of the crusades, this is a jewel of a book. "
-- The Washington Post

"Madden's books are the best."
-- The New Criterion

"Madden’s clear text invites readers at all levels of knowledge into this commentary on how the crusades shaped our modern world. [He] convincingly shows how the crusades prove useful in understanding the political, cultural, and religious wars waged in today’s society. True to the book’s title, Madden manages to deftly discuss his research while maintaining a clear, approachable style that makes this text accessible to all levels of readers. . . . His ability to set the scene breathes life into the history. . . . The extent of Thomas Madden’s research is evident, and his ability to describe history in an interesting and clear manner will appeal to all readers who enjoy reading about the past, especially where it is examined within a modern context."
-- Foreword

"Madden writes that the term and concept of the Crusades had been protean and exploited from the inception of the modern era. . . .For him, the historical understanding and popular perception of these campaigns have led to their condemnation. Yet he still defends them as an act of piety (i.e., bravery coupled with faith) and rejects the dominant perception that they are in any way responsible for modern tensions between the Middle East and the West."
-- American Journal of Islamic Social Sciences

"A brilliant text and handbook for students, teachers, and all readers taking interest in the history of the Crusades."
-- Byzantische Zeitschrift

"Readers will be pleased that Thomas Madden has hit just the right note in his sweeping but concise account of the crusades. While he follows the development of crusading down to the period of the Protestant Reformation, and offers, in an afterword, speculations about the modern impact of the medieval crusade, he never fails to interest and inform. His prose is lucid. And to give the graphic point, he offers the reader fourteen clearly produced maps depicting the Mediterranean world about A.D. 1000, the routes of the main crusades, and the crusade plan of Maximilian I in 1518. The usefulness of these is reinforced by an index, a glossary, mainly of Islamic terms, a list of translated sources, and a select bibliography."
-- The Catholic Historical Review

"Readers will owe Thomas Madden warm thanks for so clear an introductory account of so complex a phenomenon as a crusade."
-- The Historian

"I love this book. It is clearly and artfully written, user-friendly, and well-organized, with excellent maps and an up-to-date suggested readings and sources in translation section."
-- Paul Cobb, University of Notre Dame